Sign In
Coronavirus: Find out how to play EuroMillions safely online during lockdown - it's quick, safe and easy to get started. Learn more
×
Lotteries
New App!

EuroMillions is a lottery that is played across nine European countries. Draws take place on Tuesday and Friday evenings with a minimum guaranteed jackpot of €17 million, which can roll over up to an impressive €200 million.

Find out about the latest EuroMillions winners, information about unclaimed prizes and details of upcoming special draws. 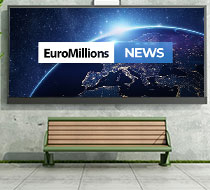 EuroMillions Ticket Worth £57 Million was Bought in South Ayrshire

It has been revealed that the jackpot-winning ticket for the EuroMillions draw on Tuesday 31st March was purchased in South Ayrshire. This information has been released as the prize remains unclaimed two weeks after the draw.

EuroMillions has been creating big winners since it was launched in 2004. With 13 different prize tiers, there are lucky players in every draw and several billion pounds have been paid out in prize money in the UK alone - a figure which is rising rapidly!

Could you be the next BIG winner?