The EuroMillions jackpot worth £40,957,696.60 on Tuesday 3rd December 2019 was won by a single ticket sold in the UK. The jackpot is now the seventh top prize to be won in the country so far this year, and the 104th overall since the game launched.

The real story, though, is the £40 million jackpot and the fact that it is the third EuroMillions jackpot in a row to be won in the UK. It follows a record £170 million win on 8th October and a £105 million win on 19th November.

The Thomsons’ win put them at ninth place on the UK’s lottery rich list, and while the £40 million won on Tuesday won’t be enough to crack the all-time top 10, it is the 10th-biggest EuroMillions jackpot of 2019.

The winner now has 180 days to come forward and claim their prize and will then decide whether or not to go public.

The winning streak has really taken off in the last couple of months, starting with the record-breaking £170 million win in October. Take a look at all the EuroMillions jackpot winners from 2019 in the table below and see just how well the UK has done. 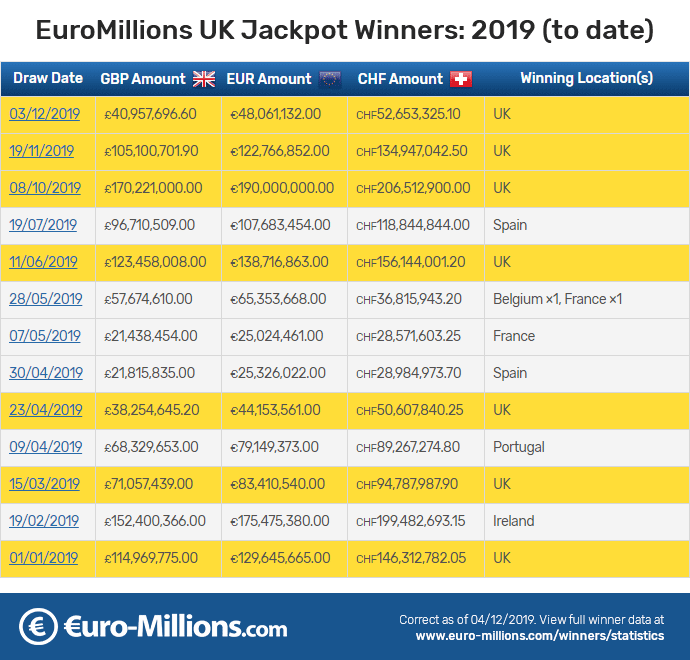 This is by no means the norm; the jackpots in 2018 were spread much more evenly. Seven of the nine participating countries had at least one jackpot win that year, with Belgium and the UK leading the way with four each. The UK is now at the top of the all-time EuroMillions jackpot leaderboard for the first time in years, tied with France on 104 wins. Spain has seen 100 jackpot winners since the game began and the three countries together account for nearly two-thirds of all EuroMillions jackpot wins.

The reason for that is simple: more tickets are sold in those countries because there are more people to buy them. The more tickets that are sold, the more winners there are. It doesn’t just apply to jackpot wins, either: France leads the way in total prize wins, with the UK and Spain just behind. You can find out more about this and a lot more on the Prize Winner Statistics page.

There are still eight more draws left this year so plenty of time to add to those numbers. Coupled with the 10 guaranteed millionaires on New Year’s Eve, it means that UK players still have a lot of prize money to play for in 2019.