We’re back again for another exciting night for EuroMillions players, as a jackpot of €190 million is up for grabs for the fourth consecutive draw. Twenty-one draws have been and gone since the jackpot was last won; will tonight be the night?

22:20 - Thanks for joining us once again for another big night for EuroMillions. The excitement is set to continue as this run of rollovers will come to an epic conclusion in a Must Be Won draw on Tuesday 8th October. You could potentially win a share of €190 million without even having to match all the winning numbers; it will be a first ever for EuroMillions and a draw not to be missed.

21:56 – You can find the full results from tonight’s incredible draw, including a full breakdown of prizes won in every country, on the Results page.

21:37 – Prize breakdowns are coming in from all across Europe. The biggest prizes tonight went to eight players who each matched five numbers plus one Lucky Star to win €2.5 million each. Not bad for a prize which is usually worth around €300,000.

21:22 – The winning UK Millionaire Make code is ZVKF44036. Remember to check the code on your ticket to see if it matches (it’s right below your numbers). If it does match, you win £1 million.

21:19 - History made. Whatever happens on Tuesday, there will be some very happy EuroMillions players.

21:16 - THE JACKPOT HAS NOT BEEN WON! You might want to think about getting your tickets early for Tuesday’s draw, as €190 million is guaranteed to be given away. Tonight’s jackpot goes without being won for the 22nd consecutive draw – by far and away the longest ever run of rollovers in EuroMillions.

21:06 – In the next few minutes we’ll hear if there has been a jackpot winner. If there hasn’t, €190 million is guaranteed to be won in Tuesday’s draw.

20:52 – A reminder that tonight’s draw was originally planned to be a Superdraw but because the jackpot has naturally rolled over to €190 million, which is much higher than the €100 million jackpot planned for the Superdraw, the funds for the Superdraw will be held in reserve and another one will take place at a later date. We will bring you news of the rescheduled Superdraw as soon as it’s announced.

20:43 – One interesting point to note: 78% of EuroMillions jackpots are won in Friday draws, so there’s a good probability that tonight’s the night for at least one lucky ticket holder.

20:38 – We can expect some millionaires to be made tonight even if the jackpot doesn’t get won. Now that it is at the cap, any funds that would normally have gone towards increasing the jackpot are instead shared by players in the next winning tier. In the last draw on Tuesday 1st October this resulted in five UK players matching five numbers and one Lucky Star to win over £1.7 million each, when the average prize for doing that is around £270,000.

20:33 - It could be up to an hour before we know if there’s a jackpot winner, but in the meantime you’ll want to find out if you are a winner. Enter your numbers into the Results Checker to quickly find out if you’ve won a prize. The results page for tonight’s draw will be updated as and when more information comes in.

20:25 – The draw will take place any time now. We’ll have the winning numbers right here as soon as they’re known.

19:40 – On a related note, the current exchange rate means that should a single ticket in the UK win tonight’s jackpot, it would be the biggest ever claimed in the UK.

The current record belongs to Chris and Colin Weir, whose €185 million jackpot worked out at £161 million in July 2011. In terms of euros, however, theirs is not actually the biggest jackpot won by a UK player. In August 2012 Adrian and Gillian Bayford won the only €190 million prize ever claimed by a UK ticket holder to date, but the exchange rate at the time meant they ‘only’ took home £148 million, over £10 million less than the Weirs won.

19:30 – Ticket sales have now closed in stores. If you still need to get your entry, you can do so online.

18:14 – With a Must Be Won draw on the horizon, would it be a bit anti-climactic if the jackpot was won tonight? Of course not; it would still be one of the biggest nights in EuroMillions history.

18:09 – Must Be Won draws work the same way as any other, except that if no one matches all five numbers plus two Lucky Stars to hit the jackpot, the entire €190 million will be shared between the winners in the next prize tier below.

18:04 – EuroMillions launched 15 years and 1,255 draws ago, so a rollover run like the current one had to happen sooner or later. It has, nevertheless, been an extraordinary turn of events:

16:25 - Take a look at the image below to get an idea of how the jackpot has progressed since July (click the image to enlarge it): 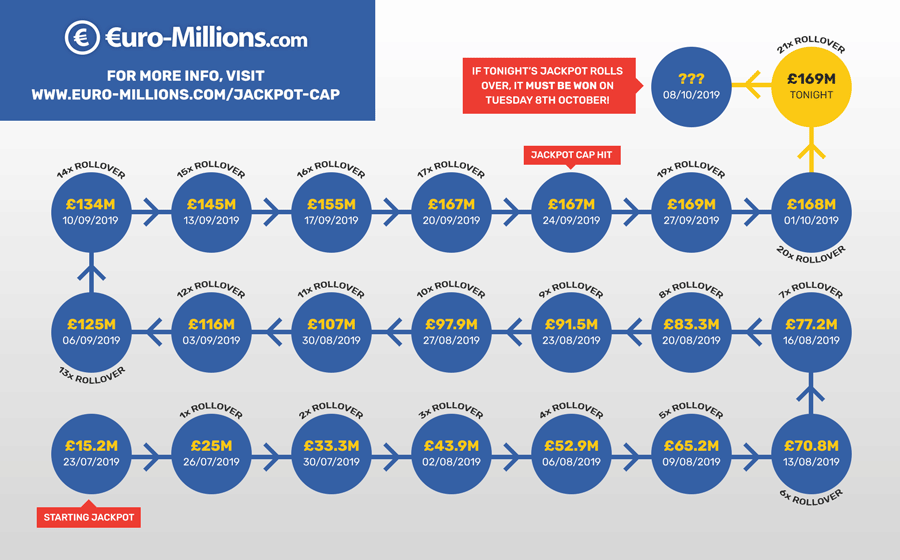 15:59 - Stick with us as we bring you the winning numbers from tonight's draw, as well as the winning Millionaire Maker code and news of whether there has been a jackpot winner or not.

15:55 - We can say with certainty that the €190 million jackpot will be won in tonight’s draw or in the next one on Tuesday 8th October. How? EuroMillions can only go five draws at the jackpot cap and Tuesday’s draw is that magic fifth one. If no one wins the jackpot tonight, the entire €190 million will be given away on Tuesday in what’s called a ‘Must Be Won’ draw.